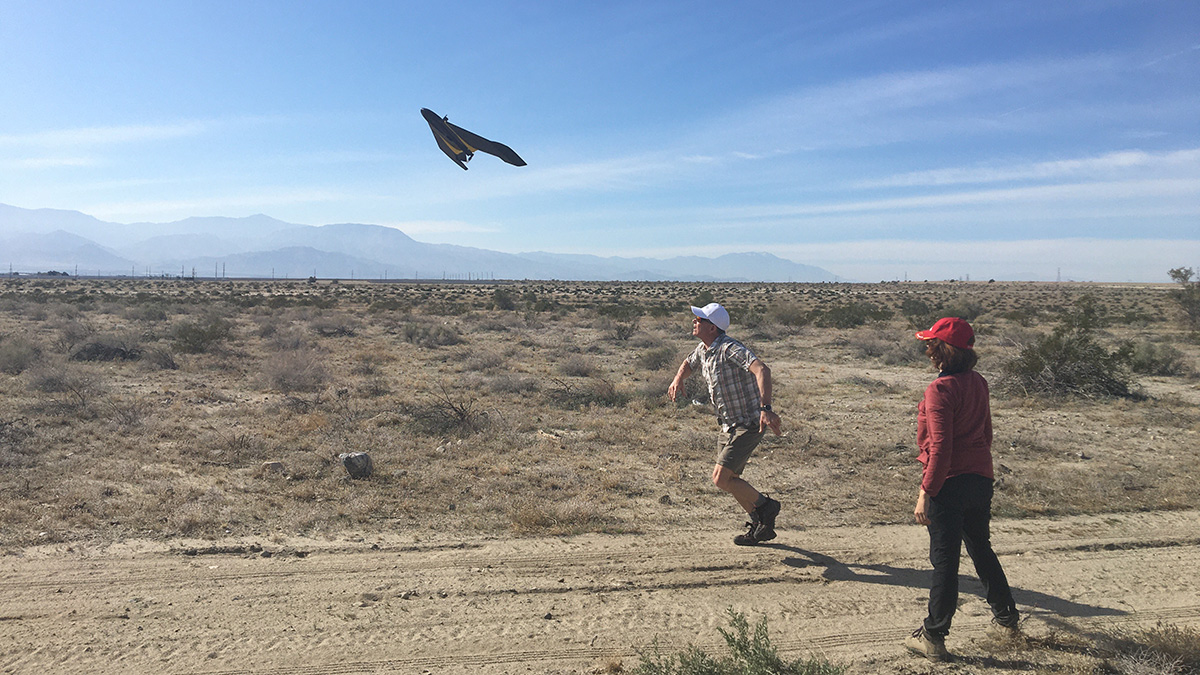 Chelsea Scott and Ramón Arrowsmith, like many earthquake scientists, track down faults. As tectonics researchers at Arizona State University, they need to know where a fault is, how much it’s moved, and how it behaves below the surface. Small uncrewed aerial systems, also known as drones, provide them with high-resolution photographs that capture the necessary information at the scale of centimeters—a higher resolution than some commonly used, easily accessible satellite or airborne data sets.

However, collecting drone data along the length of a fault is no simple task.

A magnitude 7.0 earthquake can produce a 62-mile-long (100-kilometer-long) rupture with surface displacements of up to about 3 feet (1 meter), said Arrowsmith. “You need to have a good enough ruler to measure

[that],” he said, which imagery collected from drones can easily provide. The problem, he said, is rapidly covering a 62-mile stretch. Nearly every country that regulates drone operations recommends or requires that pilots maintain visual contact with their drone.

One way around the problem is to use a bigger drone. Cheap, heavy quadcopters—helicopters that can easily take off and land—are small compared with lightweight, expensive fixed-wing drones that look like tiny airplanes.

In February 2020, Scott and three colleagues spent almost 4 days mapping 25 miles (40 kilometers) of the San Andreas Fault in Southern California. Although they had quadcopters, Scott said “the workhorse was the fixed-wing drone.”

The average quadcopter can be spotted approximately half a mile (0.8 kilometer) away; mapping long linear features like faults requires landing the drone, moving to a new location, and launching it again many times, said Scott. With a fixed-wing drone, bigger really is better; a person dedicated to keeping an eye on the drone can see the vehicle about three quarters of a mile (1.2 kilometers) away on clear days.

In addition, because quadcopters are so heavy, they can typically manage only about 15 minutes of data acquisition, whereas a fixed-wing drone can soar for nearly an hour, said Scott.

Launching and landing fixed-wing drones require the operator to have sufficient space, said Scott. In particular, landing requires about 100 feet (30 meters) of a makeshift runway cleared of any obstacles, including rocks bigger than gravel. Because fixed-wing drones are so expensive, she said, “flight planning is done very, very carefully, and unfortunately the project is over if the drone crashes.”

“If you are deploying a drone in a different country, then you have to be mindful of what [its] rules are,” said Jean-François Smekens, a volcanologist at the University of Oxford who works on drone campaigns. Some countries have fewer regulations and great flexibility, whereas countries like the United States have stricter guidelines, he said.

Two months of tracking down fault scarps in Kyrgyzstan with quadcopters went smoothly for Ian Pierce, an earthquake scientist at the University of Oxford. He and his collaborators from the Kyrgyzstan Institute of Seismology worked closely with the government to collect data to produce high-resolution topographic models. With these data, they can more easily map the faults that splice the country.

Not knowing the rules and regulations in other countries can cause problems, said Arrowsmith, who briefly joined Pierce in Kyrgyzstan. “[Working] closely with our colleagues [ensures] that we are operating with the correct oversight.”

Pierce concurred. “By working with local governmental collaborators,” he said, the military often waved his team through an area or even assisted in the work. In addition to Kyrgyzstan’s beauty and faults, Pierce said, one reason he chose to work there was the ease of conducting this type of research.

In the United States, a Federal Aviation Administration (FAA) Part 107 license allows commercial drone pilots (the category under which university researchers fall) to operate drones that weigh less than 55 pounds (25 kilograms, inclusive of equipment) during the day within line of sight. This license permits pilots to fly drones up to an altitude of 400 feet (120 meters) relative to topography or built structures, said Scott.

Many off-the-shelf drones regulate the height themselves, remaining 400 feet below the takeoff point, said Pierce. “If the topography is increasing quickly away from you,” he said, “400 feet might not get you [much] above the ground.”

In the United States, to fly higher than 400 feet, drone operators need an FAA-issued Certificate of Authorization, or COA, that defines the project’s plans and operations, said Henry Cathey, director of the FAA-approved New Mexico State University Unmanned Aerial Systems (NMSU UAS) Flight Test Site, one of seven such locations.

Under the New Mexico site’s COAs, said Cathey, “we do require certain background and training for our pilots.” All pilots at this site not only have their Part 107 license, but they also have their private pilot licenses, he said.

To fly above 400 feet, said Cathey, “we have a COA that allows us to fly anywhere in the U.S. up to 1,200 feet (366 meters).” They also have 15,000 square miles (38,850 square kilometers) of COA airspace in southern New Mexico in which their pilots can fly drones up to 10,000 feet (3,048 meters), often with chase planes and prior coordination with air traffic control. An agreement with Spaceport America also allows them to fly from ground to space within the neighboring White Sands Missile Range.

Industry, university, and federal researchers pay to use the NMSU UAS Flight Test Site, with each group usually “trying to do something [with drones] that has never been done before,” said Cathey. One purpose of these FAA sites is to help provide flight data to the FAA as needs evolve, he said. Night operations, flights beyond visual line of sight, package delivery, and technologies that help aircraft detect and avoid one another are all part of the FAA’s road map charting the future of drones in the United States.

Regulations that evolve with the technology will be welcomed by researchers. “A lot of the science questions are still beyond the line of sight,” said Arrowsmith.

This type of monitoring could be very effective in areas of seismic activity in California, Arizona, Nevada, Utah, and Oregon.