Why the Himalayas are crumbling

Source: On a precipice: Why the Himalayas are crumbling

The landslides were inevitable, Sunni Ram keeps saying. His village, Thatch, is located right above a highway near Nigulsari village of Kinnaur district, where a massive landslide on August 11 killed 28 people; another 13 were injured. A month ago, another landslide in this district in Himachal Pradesh had killed nine tourists and damaged a bridge.

While the incidents have made the headlines due to the high casualties, Ram says, this is not the first time landslides have occurred at these places. “Another landslide near Thatch in 2019 killed three dozen sheep and goats,” he adds. Rockfalls have also become frequent in the last few years. It’s as if the Himalaya is crumbling from these spots, says Ram.

A team from the Geological Survey of India, following their visit to Nigulsari, has said in its report that a steeply inclined slope and incessant rainfall are behind the incident. Ram and several other residents of Thatch and Nigulsari, however, blame it on the 1,500 MW Nathpa Jhakri Power Project on the Sutlej. The project has a 27.4 km long headrace tunnel for conveying water to the underground power station.

This tunnel, dubbed one of the longest in the world, passes under Nigulsari and Thatch and is not far away from the spot where the landslide occurred. “The effects of the heavy explosions made during the construction of the tunnel in the late 1990s are becoming visible now,” says Govind Moyan, deputy head of Nigulsari gram panchayat.

All the five villages under this panchayat, including Nigulsari and Thatch, are affected in some or the other way by the Nathpa Jhakri project. Almost every house has cracks on its walls along with fissures in the fields and gardens. Springs too have dried up, says Moyan. 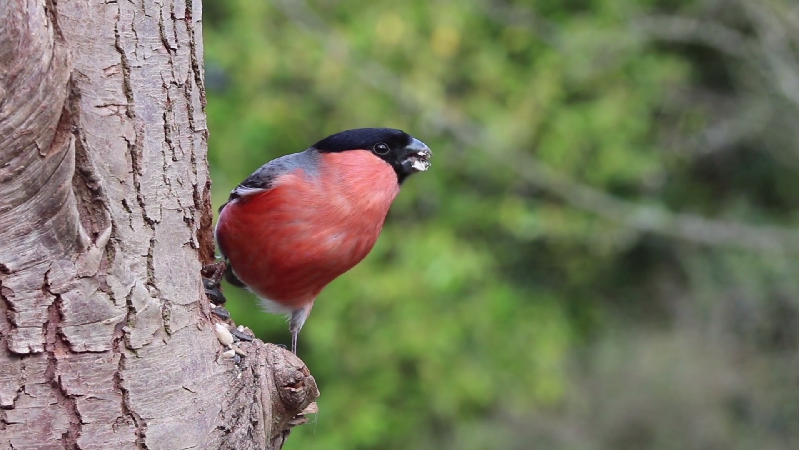 Following the August landslide, residents of Nigulsari panchayat have submitted a memorandum to Himachal Pradesh Chief Minister Jai Ram Thakur, demanding protection as their villages are in danger because of the tunnel.

People’s resentment against hydropower projects is not limited to Nigulsari. Since the landslide, more and more villages in Kinnaur and the neighbouring Lahaul and Spiti district are joining a campaign, “No Means, No”, to oppose the indiscriminate digging of the fragile hills for power generation.

Their immediate concern is the 840 MW Jangi Thopan Pavri Hydro-electricity Project being planned on the Sutlej near Jangi village of Kinnaur. It is said that the project will have a 12 km long tunnel under villages between Jangi and Thopan.

Sundar Negi, a youth from Khadra Dhank village that will also be affected by the tunnel, says incidences like rockfalls and landslides have been occurring especially around those villages where either dams or power houses have been constructed, or tunnels are laid.

Sundar and several other youths who have started the “No Means, No” movement are also opposing a government plan to set up a series of hydropower projects on the Chandrabhaga river that passes through Lahaul. More than half a dozen projects of about 1,600 MW capacity have already been allotted to power companies.

Residents say such massive construction activities will make them vulnerable to disasters as the region is not only a cold desert that remains under snow for six months but also falls in the high-risk earthquake hazard zone (Seismic Zone 4).

On August 26, thousands of people joined the “No Means, No” movement to demand scrapping of all proposed hydropower projects in the region. 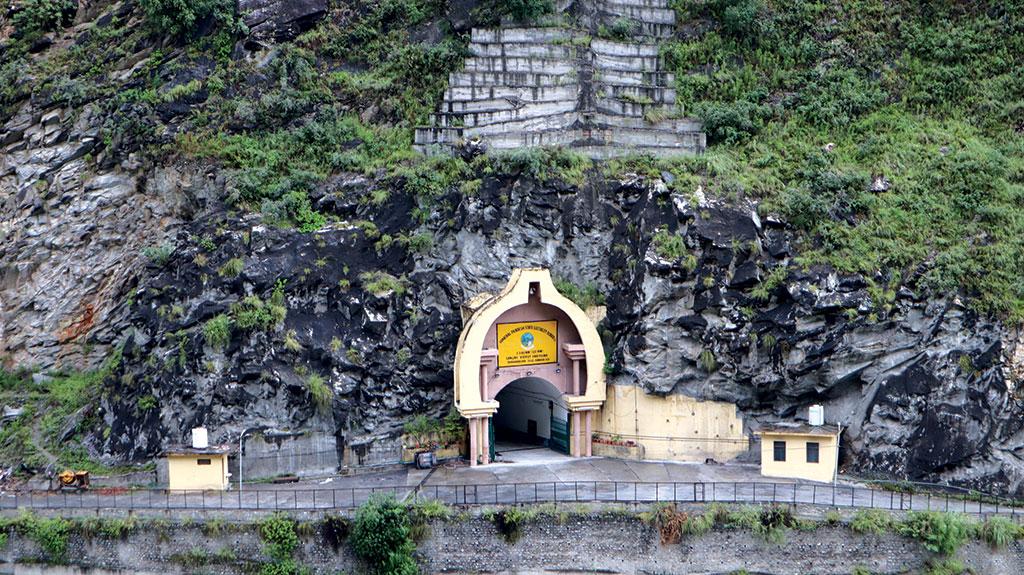 R S Negi, president of conservation group Him Lok Jagriti Manch, which is at the forefront of the movement, says Kinnaur is also not suitable for hydropower projects, particularly those requiring power tunnels.

“The lower part of Kinnaur is a semi desert and the upper part is completely dry. There is very little vegetation here, due to which the mountains are quite weak.”

So if hydropower projects are installed, incidents like Nigulsari landslides will increase, he says, citing the example of Urni village that got destroyed in the 2014 landslide. Four tunnels of the 1,091 MW Karcham Wangtoo hydro project pass under the village. Ramanand Negi of Urni recalls when the tunnels were being laid.

“Our houses used to shake every time there was an explosion. But the administration never paid heed to our complaints,” he says. Several other nearby villages have also faced damages. “Surprisingly, no one took our permission while laying the tunnels,” Ramanand says, pointing to the cracks on the walls of his house.

Kinnaur is a tribal district and has been declared as a scheduled area under the Fifth Schedule of the Constitution. Though in such areas it is mandatory to obtain the consent of local people and a no-objection certificate from the gram sabha before setting up a project, residents allege they were never consulted for most projects.

RS Negi says the gram sabha’s consent is usually sought right at the end when the project has received other approvals and investments have been made. “This will have to change now,” he says.

The state has 75 hydropower projects (operational and proposed), each with an installed capacity of 25 MW or more, as per the Directorate of Energy, Himachal Pradesh. A project this big usually requires tunnelling.

Down to Earth analysis shows 70 of these projects are in just eight districts with high and very high vulnerability (see ‘Recipe for disaster’, p25). However, there is a serious dearth of scientific studies that examine how hydropower projects have contributed to disrupting the fragile geology. 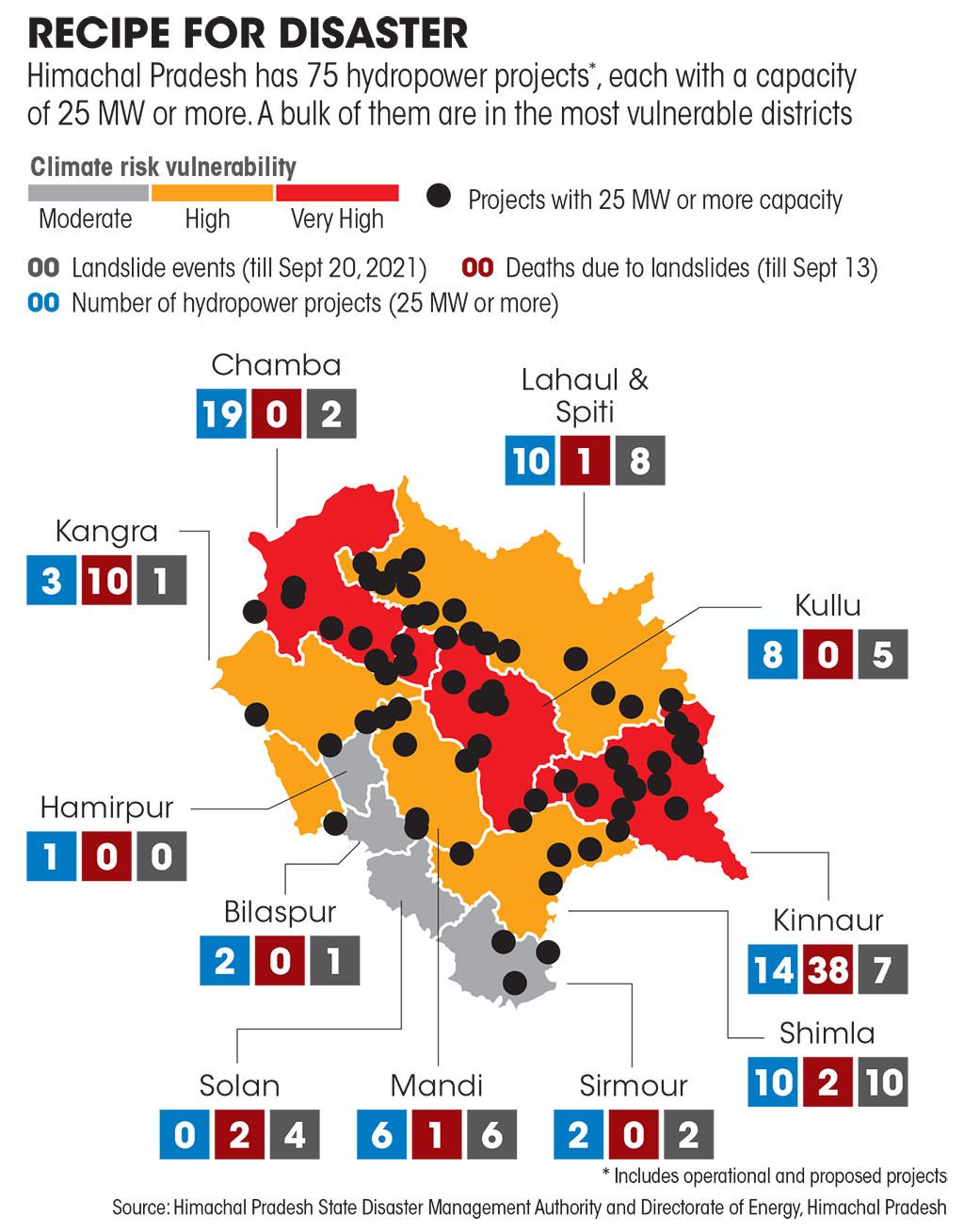 Mansi Ashar and Prakash Bhandari of Himdhara Environment Research and Action Collective, a research group that works on issues of forest rights and environmental justice in the Himalayan region, conducted a study between 2012 and 2016 in Kinnaur.

Their study shows that 90 per cent of forest land diverted for non-forest activities between 1980 and 2014, was used for hydropower projects and transmission lines.

While this has damaged forest biodiversity, it has also increased incidents like landslides. To make matters worse, says Ashar, construction activities have increased in the recent past.

Events like erratic and extreme rainfalls and cloud bursts are also frequent now. If all these factors are present in an area, already seismically active, there will be increasing incidences of landslide.

In the states, California, Washington, Alaska, Oregon, and Hawaii have the largest number of landslides.