Hideaway Hills residents still have no answers about mine situation

Source: Hideaway Hills residents remain in the dark, still no answers about mine situation – KNBN NewsCenter1

BLACK HAWK, S.D. — Residents of Hideaway Hills remain in limbo regarding the homes in the vicinity of the abandoned gypsum mine. 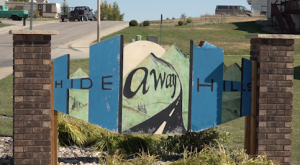 The mine first came into the public eye around April of 2020, when sinkholes opened in the area to reveal it. More information became available in September, when the Montana Tech study made it known the mine was larger than originally believed.

The affected area now extends along the eastern side on Interstate 90.

Residents have heard their community was built on an old gypsum mine. The sinkholes opening up last year gave confirmation to their suspicions.

“All the older generations talk about playing down in the mine,” resident Courtney Ahrendt said. “And they’re like ‘Oh yeah, we all knew about it.’”

Ahrendt has lived in the Hideaway Hills community since 2012, and has seen the ground and structures nearby shifting first-hand.

In her backyard alone, her back porch has a significant lean. Parts of the pavement have also shifted inches upward, posing as a potential tripping hazard.

“It’s been advised not to let your children play in the dirt,” she added, “Mostly because they’re

[lungs] not fully developed and inhaling that dirt is always most concerning.”

Since the mine’s discovery, residents have seen significant changes in the area. Most notably shifting pavement and structures on top of the sinkholes already in place.

Some, like Ahrendt, are even avoiding parts of their own homes.

“Well now that we know there’s a mine under there, do we know that it’s settling or do we know that it might be falling in? I will not sleep downstairs. I haven’t slept downstairs since a couple of weeks after it opened. I sleep upstairs with my girls,” she stated. “Not sure it would make a difference if it started to fall in, but in my head I got a couple extra seconds.”

Above all, residents just want things to follow through to the end and go back to their livelihoods. Studies since the collapse show the extent of the mine.

However, developments on a legal level have yet to proceed.

“I just hope everything gets settled out and we can get back to our lives and get this behind us,” fellow resident Loren Wermers said. “There’s people that did wrong when this development was built and it needs to be made right.”

The case is currently in federal courts. Meade County has until the end of October to respond.