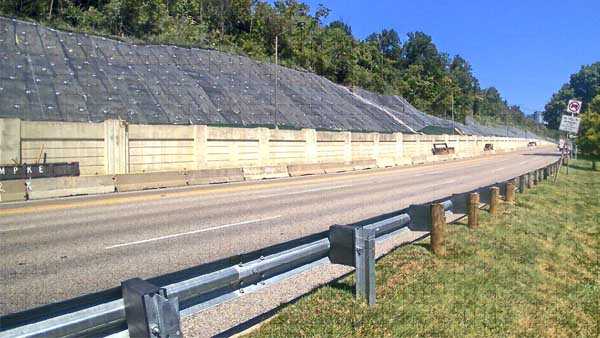 Crews have wrapped up construction on a years long project to stabilize a large swath of hillside along Columbia Parkway in Cincinnati, Ohio — a stretch that has long been a landslide risk.

The project’s footprint extends over two miles on the uphill side of the parkway from Bains Street near downtown to just east of the William Howard Taft Road-Torrence Parkway intersection in East Walnut Hills.

Cincinnati’s Department of Transportation & Engineering began developing a long-term stabilization plan for the parkway in the spring of 2019 following a series of landslides in multiple locations along the uphill side.

Landslides in the area began increasing in frequency and significance in recent years, peaking in the winter and early spring of 2019.

The threat to public safety also was increasing with mud and debris frequently spilling over existing retaining walls onto the roadway, prompting emergency closures along the five-lane thoroughfare that carries approximately 30,000 vehicles a day from the city’s east side into downtown.

The parkway was built in the late 1930s as a Depression-era public works project situated along a bluff overlooking the Ohio River. The Ohio River traces a path along Illinois, Indiana, Kentucky, Ohio, Pennsylvania, and West Virginia. Mitigation efforts in the 1990s helped reduce the impact of landslides on the downhill side of the parkway but didn’t address the uphill side.

City council approved funding for an emergency mitigation project in late spring 2019 and it started to take shape that summer once Canton-based Beaver Excavating was selected as the prime contractor.

The proposed dual solution including soil nailing for the steepest sections, and additional retaining walls in areas less steep.

Soil nailing is a stabilization technique in which steel rods, known as “soil nails,” are drilled deep into bedrock to hold them into place. Crews terraced the steepest parts of the parkway, drilled the nails 30 feet to 50 feet into bedrock, installed a heavy metal mesh laced with landscaping fabric and grass seed over top to secure the hillside.

The two westbound lanes where equipment has been staged during construction will remain closed a few more weeks as crews repair inlets for drainage, install and repair wiring for light poles and repave.