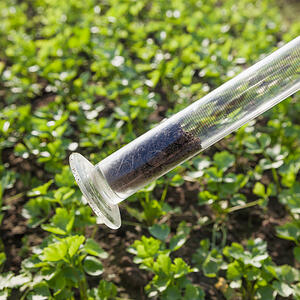 In terms of measuring soil contamination, measuring soil electrical conductivity can provide useful information for a more complete site characterization study. Measuring sub-surface soil electrical conductivity is becoming less expensive as well as faster and easier. This form of measurement has most commonly been used for measuring physical and chemical soil properties but the ability to pinpoint contaminants is improving, particularly with software designed for the job.

How to Measure Soil Conductivity

Non-contact sensors, as the name implies, function without having to touch the soil directly. This method is based on the measurement of the change in mutual impedance between a pair of coils passed through the soil. Electricity is applied through the coils, which creates a magnetic field. Much like the way an induction motor operates, this magnetic field induces an electrical current in nearby materials that are magnetic. You can assess the level of current induced by measuring the impedance in the operating coils.

Passing non-contact sensors down a borehole has been used effectively to establish geophysical properties such as the presence of clay (which may have highly conductive materials distributed through it) and water table levels. In cases where an area is known to have contamination, the identification of clay layers and groundwater distribution can help to estimate where ‘plumes’ of contamination might be contained orspread underground. In the case of a borehole test, water samples can be gathered directly from discrete depths to confirm the presence of various types of contaminants.

In addition to establishing the presence of clay or groundwater levels, since the most common soil contaminates are hydrocarbons and industrial pollutants such as heavy metals, volatile organic compounds and other industrial chemicals, soil conductivity can help to screen for the presence of all of these materials (or the lack of) providing insights into the subsurface conditions. This is because the electricity is actually conducted through pores in the soil that are filled with moisture and distributed throughout the soil being characterized. The more conductive materials there are within the distributed groundwater, the more the soil will have an electrical carrying capacity. Oil contamination often has a high salt content, leading to higher conductivity. Heavy metals such as copper will also clearly increase the electrical carrying capacity of the soil.

As with the comparison of other types of soil characterization using CPT vs. a borehole, any time you can substitute CPT for a borehole test you are able to lower test costs and dramatically increase the number of test points that are viable to ‘sound’. CPT also disturbs soil conditions underground less than borehole drilling, which can be an important factor in testing specific types of sites, such as sites with known contamination.

The technical term for the compounds which dissociate into ions in water, enabling the conduction of electricity, are electrolytes. Hydrogen and hydroxide ions have very high conductivity, so detecting inorganic acids, hydroxides and their salts can help to establish the impacts of groundwater towards concrete.

Because many factors can influence conductivity, such as the native conductivity of subsurface clays, it is best to evaluate specific zones, or defined areas, to establish which factors can be accounted for by geophysical properties and which are the results of anomalous data, and therefore likely contamination. This type of testing therefore is usually conducted using a systematic grid, and direct samples taken to confirm the assumptions made of the interpreted data.

Electrical conductivity testing using CPT can be a valuable source of a wide range of data that can be important to engineers and site characterization professionals. The benefits of lower cost, more data points, safer operating conditions and the immediacy of data for analysis and reporting all apply to any type of CPT testing. You may also be interested in Fluorescence Detection.