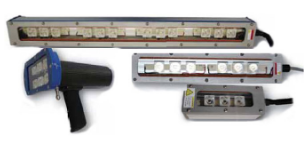 Hydrocarbons: including gasoline, kerosene, diesel fuel, jet fuel, lubricating and hydraulic oils, and tars and asphalts contain Polycyclic Aromatic Hydrocarbons (PAH’s). Polycyclic Aromatic Hydrocarbons (PAH’s) distributed in soils and groundwater fluoresce when irradiated by ultraviolet light. Because different types of PAHs fluoresce at different wavelengths, each has its own fluorescence signature. Using an instrument that measures the intensity and wavelength of the fluoresced hydrocarbon enables the assessment of the hydrocarbons present. This makes UV Fluorescence a useful technology to use in characterizing surface, subsurface and groundwater hydrocarbon contamination. We call this Fuel Fluorescence Detection (FFD).

What’s the right fluorescence detector for you?

Using handheld UV lights enables site technicians to establish the nature and distribution of contamination above ground. For surface spills such as what gathers along a shoreline or for surface based operations such as above ground tanks and pipes, this can be a useful place to start. For underground storage tanks a useful way to begin site characterization is with a subsurface probe. Engineers trying to establish the limits of the ‘plume’ or the depth of the contaminant as it travels underground. Plumes will extend outward, downward and upward depending upon factors such as the flow of groundwater and the confining layers of clay and rock.

Leveraging the ability to generate and measure fluorescence underground requires a step up in technology. In the case of CPT, a UV light source is placed in the cone itself. Fiber-optic cables transmit the resulting fluorescence to the surface where the intensity and wavelength can be measured.

Because of the efficiency of CPT, large and complex sites can be characterized quickly and efficiently. The data logs are available immediately to influence critical decision-making which can help to manage costs in the long term. For instance monitoring wells may need to be installed to enable long-term groundwater monitoring. These wells and sampling can be quite expensive. UV Fluorescence CPT helps to establish site characterization and assists a monitoring plan which will be the most efficient and effective over the long run.

Depending upon where your CPT business is located, FFD can be both a lucrative and intrinsically rewarding opportunity for you. We encourage you to speak with a Vertek CPT expert or request a product demonstration so that you can learn more about the hands-on use of these technologies.