A non-destructive with ground-penetrating radar inspection could save time and money during investigations of this critical element in concrete infrastructure. 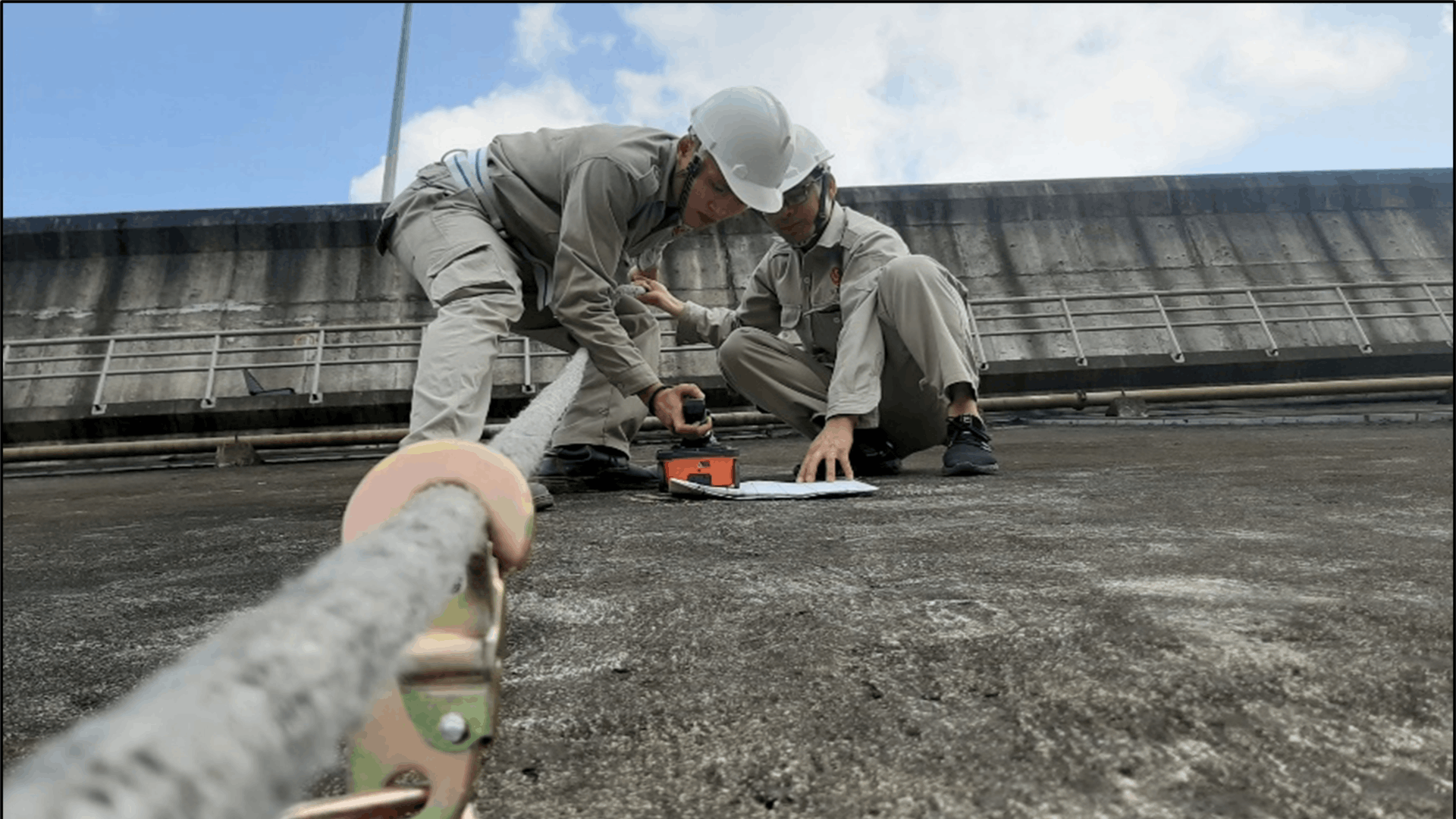 As the world struggles to improve its critical infrastructure, many are seeking out non-destructive testing (NDT) methods that can help to accurately determine what can be repaired and what needs to be replaced. In the field of dam safety, NDT methods are seen as a way to cut down on the actual work that has to be done, while making sure that condition data is most accurate.

Engineers, facility managers, and dam operators need accurate information on the structural health of their facility to take decisive action to prevent catastrophic incidents. Earthquake monitoring systems can assist decision-making by providing predictive data before an earthquake and evaluating the structural integrity of the dam or levee before and immediately after an earthquake (Dam Safety Group,  Ground-Penetrating Radar for Dam Investigative Applications, 2021)

Among the available NDT methods, ground-penetrating radar (GPR) is growing in importance for dam evaluation applications. Increasingly, both public- and privately-funded dam owners are looking to GPR technology to inspect the dam infrastructure and surrounding areas.

GPR can be cost-effectively integrated with other types of ground surveys to build a visual understanding of the overall subsurface of the site. The technology can be rapidly deployed, provides an effective means to evaluate subsurface information, and contributes to continuous monitoring and condition assessment throughout a structure’s life.

In response to the need for the best possible NDT methods, several industry experts founded the Dam Safety Group, which provides a wide range of geophysical and seismic techniques and technologies to address non-invasive investigation, maintenance, and monitoring of dams, embankments, and levees. The founding members include Geometrics Inc., Kinemetrics Inc., Robertson Geo, IRIS Instruments, and GSSI.

GPR uses radar (radio detection and ranging) to transmit and receive high-frequency electromagnetic waves to image the subsurface. A tiny pulse of radio-frequency energy is sent into a material using an antenna.

This wave reaches a target and is reflected back to the receiver antenna as a high frequency, electromagnetic reflection. The whole process happens very quickly—at about 100,000 pulses per second. GPR features extremely low power emission rates—less than 1% of the radio waves used by a cellphone—so there is no need for extra safety equipment or safety training to use these antennas. The wave is transmitted into the concrete, soil, or subsurface and reflects off different materials with which it interacts. The equipment measures “time of flight,” or the time it takes for the wave to travel through the material, reflecting from an object or boundary, and returning back to the receiver.

Using a lower frequency will provide a signal that penetrates deeper in the ground but will result in lower resolution.

Subsurface variations create reflections that are picked up by the system and stored on digital media. An integrated computer records the strength and time corresponding to the return of any reflected signals. These reflections are produced by a variety of materials, including geological structure differences and manmade objects like pipes and foundations. GPR can be used in rock, soil, ice, freshwater, pavements, and concrete structures. The reflected signals are used to detect objects, changes in material, and voids and cracks. GPR is considered the most accurate, highest resolution geophysical technology.

In general, GPR works best in dry sandy soils with little salt content; dense clay-based soils are difficult to penetrate with GPR. In some situations, penetration depth may be limited to a few feet or less within clays, whereas targets residing in sandy soils can be detected at depths of 30 ft. or more.

GPR equipment makes use of a variety of frequencies (measured in cycles per second), depending upon the depth required and the potential targets being investigated. One cycle per second is 1 Hertz (Hz). GPR is in the megahertz (MHz) or gigahertz (GHz) range.

Using a lower frequency will provide a signal that penetrates deeper in the ground but will result in lower resolution. The converse is true for high-frequency antennas—greater resolution, but less depth penetration. The image below is from a 2.7 GHz frequency antenna showing a series of hyperbolas. These hyperbolas correspond to pieces of rebar located at different depths ranging from 1-5 in. 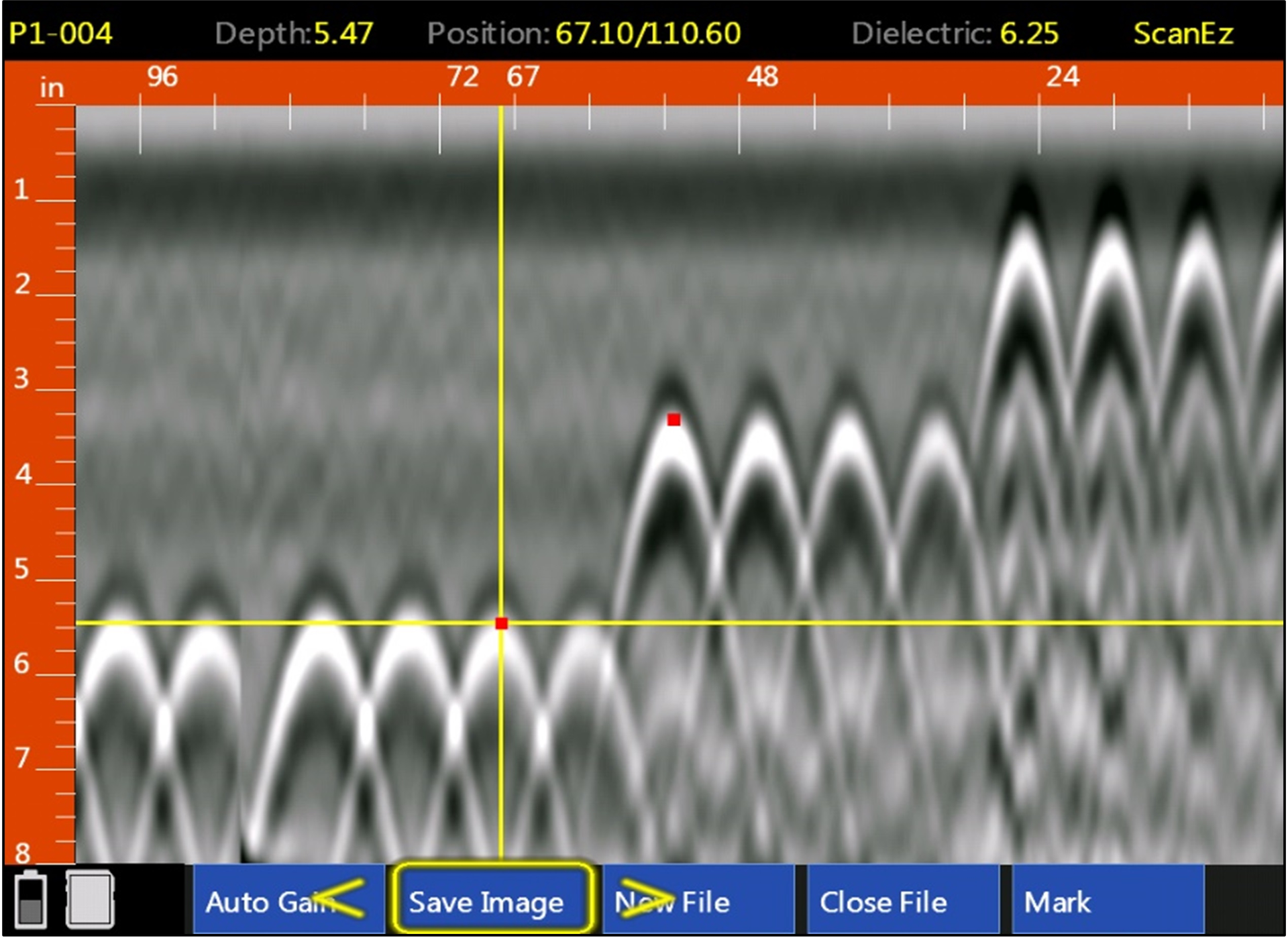 Results of a scan showing rebar within concrete. The measurement on the right shows inches in depth. Geophysical Survey Systems

GPR is typically used to determine the type and location of concrete reinforcement and detecting deterioration in concrete slabs. 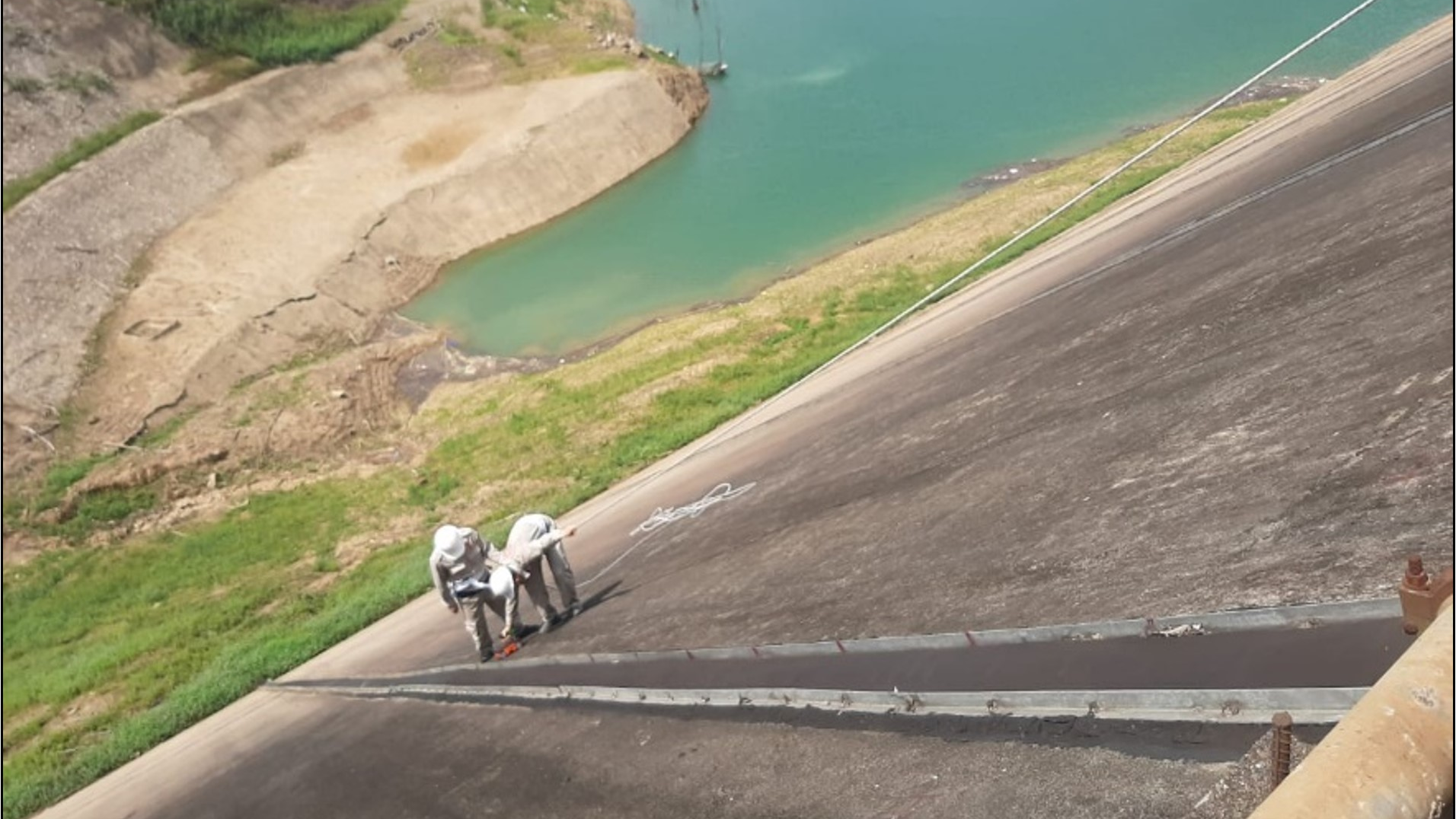 Concrete condition assessment can be performed using a ground-coupled GPR system or antennas. A ground-coupled antenna provides clear horizontal resolution, which is sufficient to enable imaging of individual rebars in the top mat, typically not possible with other types of GPR antennas. Ground-coupled antennas are used to collect densely spaced measurements along lines that are oriented so they cross over the top rebar in the upper mat at right angles (or close to a right angle if the rebars are skewed). The amplitude of the radar wave reflection from each rebar is recorded versus its location on the bridge. Relative changes in the rebar reflection amplitudes are typically indicative of the condition of the rebar and/or concrete above it. 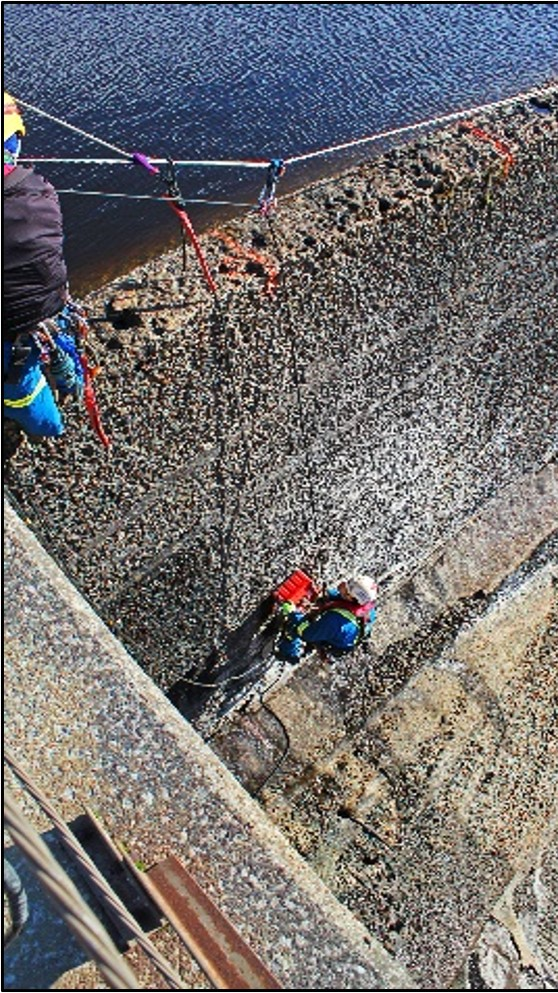 Software is used to collect, process, and interpret GPR data as part of a dam condition assessment. The procedure provides a map of rebar reflection amplitudes. The areas with the lowest rebar reflection amplitudes (yellows and reds) correspond to the portion of the concrete containing the most concrete deterioration and/or rebar corrosion. The GPR data is then augmented by visual inspection and other accessory condition information, such as previous maintenance records.

A Dam Example, GPR In Action

GPR systems have been used for decades to conduct non-destructive dam investigations that provide information on sediment build-up and leak or void detection. One interesting example is a survey done for the CuaDat Irrigation Dam, one of the largest irrigation dams in Vietnam. The entire concrete surface inspection survey was conducted by the Department of Geophysical Application Research – Institute of Ecology and Works Protection (Dam Safety Group, Survey of CuaDat Irrigation Dam, Vietnam).

Vucico Vietnam, a representative for GSSI, assisted in the survey of the concrete dam, which is part of the CuaDat Reservoir, the largest hydropower and irrigation construction in Vietnam, with a capacity of 1.5 billion cubic meters. This reservoir, constructed between 2004 and 2009, is located upstream of the Chu River, Southwest of Hanoi, and contributes to flooding control as well as maintaining water supply for more than 86,000 hectares (roughly 212,510 acres) of agricultural land, along with supplying water for domestic use and for industrial use. The dam is 1,023 m long with a maximum height of 119 m.

The survey scanned the entire dam surface over the course of several years. Some of the work could only be done when the water in the reservoir dropped to levels that provided access to the surface of the dam, which is usually covered by water. 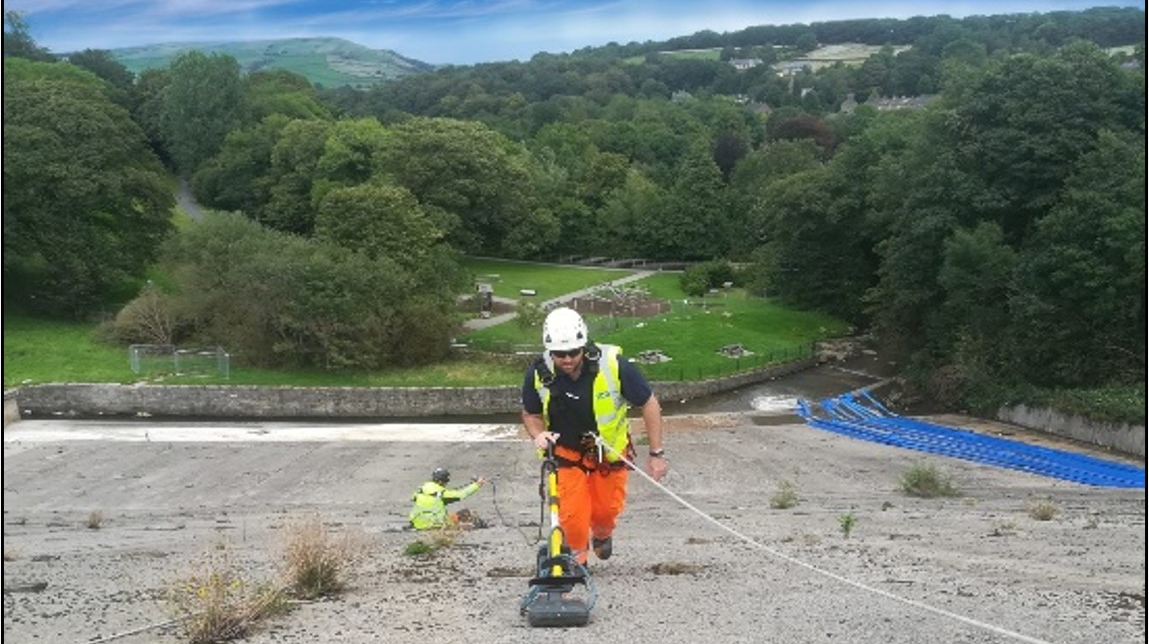 The team used the GSSI SIR 30 system and 900 MHz antenna for the first stage of the survey to locate any areas with possible voids. Voids identified were to be repaired by injecting concrete through a drill hole. The challenge was not to damage or destroy the existing rebar in the structure. Later, the team deployed a StructureScan Mini XT to refine the survey area that required repair by examining the rebar locations and marking an area where it was safe to drill.

As one of the main non-destructive technologies used to assess the structural integrity and physical condition of dams improved GPR technology has substantially enhanced dam inspection results. Understanding the true physical condition of a dam allows maintenance and repairs to be made to ensure the physical safety of the surrounding community.

This type of technology could be especially helpful in states with a large number of dams. Currently, the states with the most dams are Texas, Kansas, Mississippi, Missouri, Georgia, and Oklahoma.