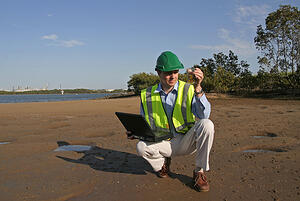 Obtaining a representative and undisturbed sample of cohesive sedimentary soil, such as sand, is very difficult and often times impossible. Because of this, determining the properties of sandy or fine grained soils is best done in-situ, making Cone Penetration Testing (CPT) one of the best testing methods for measuring mechanical properties of sediment.

When conducting cone testing of sediment the horizontal stress and sediment density are the most influential parameters on the cone tip resistance. The cone penetration tip resistance is influenced by the soil properties ahead and below the tip. If you’re dealing with a sand layer that is less than 70 cm., it’s important to consider what types of stratification it is located between. For example, if it’s located between deposits of soft clay the CPT may not reach it’s full value within the sand layer, meaning the relative density of the sand may be underestimated. By monitoring the CPT pore pressures, these influencers can be identified.
The substantial effects of soil compressibility on CPT measurements are considered to be an advantage if they are identified correctly. Compressibility is one of the key factors to successfully determining soil properties and classifying soil types. Using CPT, relative density and friction measurements soils can be broken up into high, medium and low compressibility. By classifying sediment compressibility during cone testing you can better measure the particular sediment properties.
Sand for example, originates from quartz or silica; it contains hard materials, does not have cleavage planes and is resistant to weathering. Certain sands, for example siliceous sand, contain trace portions of other minerals, like chlorite. Compared to other types of soil, the compressibility of sand is most complicated because it is dependent on several different factors, including: grain size and shape, particle crush-ability, angularity, grain mineralogy, void ratio, state of effective stressers, as well as petrology.
Under the same stress state and relative density, low compressible sands resist CPT penetration more than high compressible sands. Sand compressibility decreases the cone tip resistance and often increases the peak friction angle. By determining the compressibility seen during in-situ cone testing you can identify certain properties of the sand. Another example, sands such as carbonate/calcareous or micaceous have a higher compression rate. By gathering data in-situ you are also eliminating outside factors of sample extraction and size, transport, storage, and sample variability that may effect the accuracy of the testing.