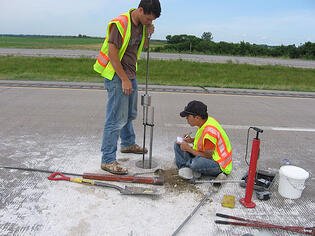 Assessing the level of compaction of sub-surface soils can be essential to designing and building structures, particularly those subject to transient or cycling loads. A perfect example is roadways. If the soil beneath a roadway is not compacted sufficiently, then over time the cycling loads of passing traffic will compact the soil further, leading to surface failure such as large cracks, potholes and displaced pavement.

Assessing the compaction of non-cohesive soils such as fine sands is a difficult challenge. As we’ve noted in other blog posts, removing a sample from the ground and sending it to a lab is not only time consuming and expensive, but can be highly inaccurate in non-cohesive soils because the samples by necessity are disturbed from their sub-surface condition.

The Dynamic Cone Penetrometer Test (DCPT) is one of many forms of in-situ soil characteristic tests that are designed to assess soil density.

It shares some characteristics of both SPT and CPT testing, which enables it to provide a useful and in the right application can deliver a complementary data set and is less expensive and troublesome than Nuclear Density testing.

The Standard Penetration Test (SPT) is done by using a sample tube which has thick walls to prevent deformation during the test.

To conduct a test, a borehole is drilled to a specified depth. The sample tube is driven into the bottom of the borehole using a drop hammer of a defined weight dropped a defined distance. The number of blows (N) needed to drive the sample tube 6, 12 and 18 inches is recorded. The SPT provides a rough indication of the soil density at depth. As noted in previous posts (link here), getting accurate data for soil density can be a complex challenge. SPT provides an estimate but is not as accurate as CPT and is more expensive due to the need to drill boreholes and the time and labor to do each sample test.

Cone Penetration Testing is a more efficient and accurate way to assess soil density at depth. However, for a small number of shallow tests, DCPT will provide a more accurate result than SPT and will be less expensive than hiring a CPT rig.

Nuclear Density testing requires a radiation source such as Cesium or Radium. The instrument emits a beam of particles that either are reflected back or pass through whatever is being tested for density. Using a calibrated sensor and gauge the density of a variety of different materials, including soils, can be determined. While Nuclear Density testing is relatively efficient, because it uses radioactive materials operators must be specially trained and licensed. It is also riskier to manage at a worksite, which again is a good reason to consider DCPT.

DCPT uses a cone similar to CPT, which provides specific advantages in how the instrument behaves in the soil while measurements are being taken vs. SPT. Because SPT readings are taken at defined depth and the output is ‘how many blows to travel a specific distance’, the test is limited in scope. DCPT testing by contrast can be reveal a more continuous profile as the tool is driven deeper into the soil to a maximum depth of one meter.

So for certain specific test scenarios, DCPT can be the test of choice. It is generally more accurate at assessing soil density (compaction) than SPT, is less expensive for certain applications than CPT and is safer and less complicated to administer than Nuclear Density testing.

While DCPT results will be consistent for a specific set of soil conditions, it is recommended that the test be calibrated to a specific geology to ensure that data interpretation is accurate. DCPT can only be used when there is no gravel in the soil as this will throw off the test data.