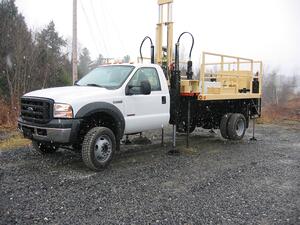 Mud Rotary Drilling and Cone Penetration Testing (CPT) both provide reliable options for gaining subsurface information. In fact, the two are even compatible – many organizations that order drilling services, such as mud rotary drilling are also using CPT for their operations.

Mud rotary drilling is a versatile and dependable method for geological drilling operations. It is most commonly used to create a hole that will then be used for water well, seismic testing and commercial drilling operations. The mud rotary drilling functions with a drill-bit that is attached to a drill-rod that rotates into a borehole. This is done while pumping a drill mud that contains bentonite or polymer slurry into the borehole. Once this operation is complete, the drilling mud will circulate into a mud pit where the remaining residue in the borehole caused by drilling will then come out and be reused. This process is done without any effort from the drilling operators, and speeds up the drilling by removing any potential obstacles.

Cone Penetration Testing (CPT) is the use of a hardened cone shape that is pushed into the ground to substantial depths. The cone is pushed using steel rods that are able to be connected to each other as the depth increases. A dominant hydraulic ram is used to produce a considerable amount of downward force to facilitate the cone to penetrate soft soils, sand and clay.

Though both provide suitable options for obtaining subsurface information, there are many benefits to using CPT over drilling. First off, CPT is a faster, less expensive option that also provides immediate results on site. CPT can also point to where rotary mud drilling will be required which is typically because of subsurface conditions or where more sampling should be done. CPT is an overall safer option, since operators and engineers avoid contaminated soils and don’t have to drill.