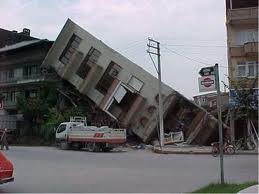 Soil quality typically refers to three characteristics of a soil; the chemical, physical and biological properties. When used as an agricultural term, soil quality is often a measure of the soils ability to produce crops over the long term.

Here, we’re going to delve more deeply into physical soil quality, and one property of certain soils that can be fascinating, but also tragically dangerous. That property is the propensity of certain soil types, under certain conditions to exhibit liquefaction.

Liquefaction, as the name implies, is the term used to describe soil that behaves like a liquid. As you can see from the image above, this can lead to catastrophic outcomes.

If the people constructing this building had a better understanding of the impact of soil quality on the stability of the structure, they might have had the opportunity to mitigate the potential damage.

So clearly, the susceptibility of a soil to liquefaction is an important indicator of the soil’s quality. But what is soil liquefaction? Well, as we noted above, liquefaction is when soil acts like a liquid, but how can this happen?

Soil liquefaction most often occurs in loose, sandy soil types where the soil itself is mostly, or completely saturated with water. When this type of soil is compressed, the pressure of the water between the grains of sand increases. If you imagine the condition below the building shown above, the vertical load on the soil induced by building the structure on it would increase the pressure on the soils beneath it. When there is water present, the water is squeezed out, like wringing out a sponge, and is forced to move down, laterally, or laterally and up, depending upon the path of least resistance. This means that the building would settle just a bit over time as the grains of sand settle into each other (compact) and the water is squeezed out.

However, under certain types of loading conditions, things aren’t quite as straightforward. If a load is applied very quickly, before the water has time to be squeezed out, or when cyclic loads are applied, as in earthquakes or the repeated pounding on the ground by storm driven waves a different outcome can occur.

Under these types of loads, the sand may be compressed and the water begins to take bear the load as the water pressure in the area increases. If the load applied is large and sudden enough, or repeated (as in an earthquake) the water may not have time to flow out before the next cycle occurs. The water pressure in this case can build over the repeated cycles, sort of like a bicycle tire being blown up. When the water pressure gets high enough, the forces that keep the grains of sand in contact with one another dissipate, and the load is no longer transmitted down through the sand to the next layer of soil or rock below it. The sand no longer can support the loads on it and it ‘flows’ like a liquid.

Predicting the ability of a soil at depth to liquefy can be vital to establishing the soils quality for supporting structures such as buildings and bridges. CPT is an ideal methodology for assessing the soil quality at depth. In areas where earthquakes are a possibility or in coastal areas where large storms can occur, there can be significant demand for CPT services to establish the soil quality of an area being developed, or re-developed.