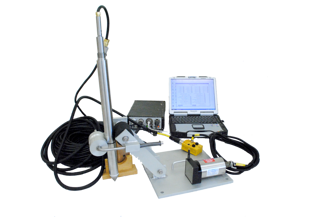 Cone Penetration Testing allows the tester to identify the nature and sequence of subsurface soil types and to learn the physical and mechanical characteristics of the soil – without necessarily taking a soil sample.

How does it work?

During a CPT test, a hardened cone is driven vertically into the ground at a fixed rate, while electrical sensors on the cone measure the forces exerted on it. The zone behavior type of the subsurface layers can be extrapolated from two basic readings: cone or tip resistance and sleeve friction. 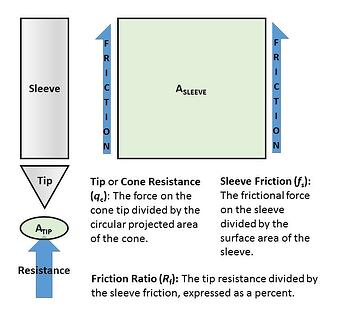 The relationship between these two measurements is expressed in the Friction Ratio, denoted Rf and given as a percent. It is the ratio of the sleeve friction to the cone resistance. High friction ratios (high friction, low cone resistance) indicate clayey soils, while low friction ratios indicate sandy soils.
The relationship between friction ratio and cone resistance is the simplest method of identifying soil strata with a CPT system, and is especially convenient because the soil behavior type can be extrapolated immediately as the data is collected. An example soil classification chart is given below (though this example uses the corrected cone ratio qt, which we’ll discuss in another blog).

As you can imagine, several factors can affect the accuracy of these predictions, for example:

Fortunately, most modern CPT cones are equipped with pore pressure sensors: corrections based on this data provide more accurate and repeatable classifications, especially in soft, fine-grained soils. Mathematical corrections along with some geologic knowledge of the test site can resolve many of the other factors.
Depending on your testing needs, CPT systems can be fitted with a variety of additional sensors to measure quantities including:

And yes, CPT systems can be used to take soil samples – and liquid and gas samples, as well.
We will discuss the collection and interpretation of CPT data in more detail soon! To see Vertek’s full line of CPT cones, push systems, carriers, and data acquisition systems, check out our Geotechnical and Environmental Catalog.