How to Read a CPT Soil Behavior Type Chart 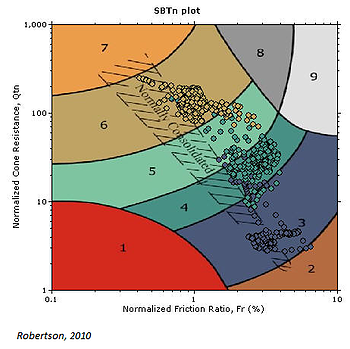 As you analyze your CPT data, you are likely to come across several different charts designed to classify soil type based on CPT results.If you are new to the field, these charts can be a bit confusing, so here’s a brief overview of one of the more common chart types.
Soil behavior classification via CPT is fast, efficient, and frequently automated via software. Still, understanding the classification method is important, as it will help you to recognize and determine the cause of any errors or irregularities in the data.
First of all, it is important to note that, since a traditional CPT test does not involve a soil sample, these charts are not designed to tell you the exact makeup of the soil. Instead, CPT tests indicate the soil’s physical and mechanical properties, or how it behaves. Hence, a CPT soil classification chart is technically referred to as a Soil Behavior Type (SBT) chart.
Most CPT soil charts are derived from tip resistance (or normalized tip resistance, Qt) and friction ratio data. 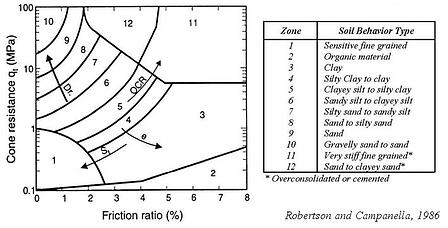 The area of the chart is divided into a number of Soil Behavior Type zones (usually 9 or 12). Simply overlaying your data on the chart gives you an idea of the soil’s mechanical properties. Depending on the depth of your soil test and the type of soil you will be testing (i.e. fine-grained or coarse-grained), additional data and mathematical corrections may be used to account for the effects of overburden stress, pore water pressure, and other factors. Thanks to the continuous nature of CPT data collection, soil behavior can be determined at any depth, creating a detailed soil stratigraphy profile.

This may sound like it involves a lot of computation, but with the appropriate tools, data analysis and visualization are quick and simple. With Vertek’s all-in-one CPT data acquisition and analysis unit, report-quality plots can even be generated in the field on a Windows-based laptop. The DataPack 2010 is compatible with all our CPT cones and specialized probes, and even accepts GPS input to attach location information to your test results.