What is Seismic Cone Penetration Testing?

Seismic CPT or SCPT is a method of calculating the small strain shear modulus of the soil by measuring shear wave velocity through the soil. The small strain modulus is an important quantity for determining the dynamic response of soil during earthquakes, explosive detonations, vibrations from machinery, and during wave loading for offshore structures. The wave speeds and moduli derived from seismic CPT measurements aid in the determination of soil liquefaction potential and improve the interpretation of surface seismic surveys by providing wave speed profiles as a function of depth. Seismic waves from SCPT tests have been detected at depths of up to 300 feet.

How does it work?

SCPT testing is performed as part of a normal CPT or CPTU test. Equipment consists of a CPT rig, push system, and: 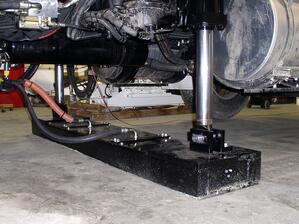 Adding seismic testing to your CPT test is simple and cost-effective if you have the proper equipment. Seismic technology is an integral part of Vertek’s CPT systems: all our digital CPT cones contain integrated dual-axial or tri-axial geophone sensors, and the Vertek DataPack 2000 data acquisition system is fully compatible with seismic data. Thus, seismic testing requires minimal set-up time beyond what is needed for a normal CPT test. If you outfit your CPT rig with an electronic wave generator, collecting seismic data is as simple as pressing a button. If you’d like to learn more about seismic CPT, check out our catalog or visit our website to watch a demo of the equipment.