EAST BETHEL — A yellow excavator ambled over the uneven bed of the Second Branch of the White River as it rearranged boulders above the Hyde Dam earlier this month. Within weeks, the dam will be gone, opening 60 miles of waterways for fish passage.

From the 1700s to the 1950s, hydropower ruled and the Hyde Dam in turn gave life to a sawmill, a gristmill, a creamery and a woolen mill that employed over 30 workers in 1860. The current dam replaced an older dam destroyed in what is known as the Great Vermont Flood of 1927.

These days, industry has departed from the Second Branch. A half-acre plot of empty land on the north side of the dam gives no hint of the artifacts of production buried below. The mill that leans on the southern edge of the dam is now a home. Conservation nonprofits and state agencies worked together to remove the dam, part of a statewide effort to remove out-of-use dams to improve rivers for both wildlife and people.

Greg Russ, a watershed restoration coordinator at the White River Partnership who is overseeing the project, estimated that it will cost anywhere between $120,000 and $150,000. He listed many reasons to remove the dam, for both the community and the river. The water behind a dam gets “really, really stagnant,” he said.

“Sediment and nutrients settle out behind the dams. We have (seen) poor water quality downstream of the dams, especially after a rain event,” Russ said. “We think a dam makes a perfect breeding ground for bacteria — really warm, stagnant conditions.”

The White River Partnership’s analysis of data before and immediately after a dam removal shows that “bacteria and nutrient levels drop drastically,” Russ said. The project’s coordinators also hope that the dam’s demise will benefit trout.

Robb Cramer heads Trout Unlimited, a conservation group that contributed over $14,000 to the removal. He is concerned about risks to trout in years to come, especially with warming temperatures.

A priority is “reconnecting our waterways to allow these fish and other related species to cold water during the summer months, especially with global warming,” Cramer said. 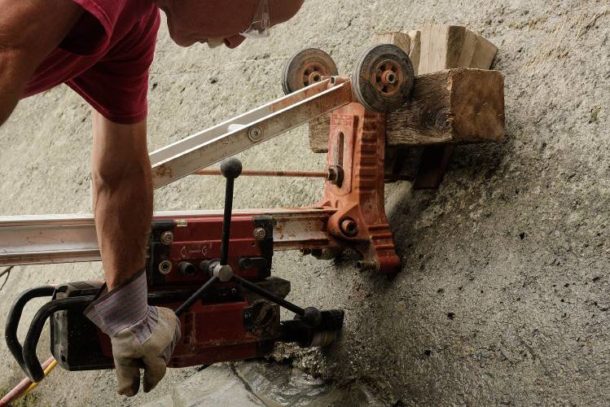 Jim Davidson, of Moore Concrete Cutting, bores through over seven feet of concrete in the Hyde Dam spillway so a diamond wire saw can be threaded through to cut a piece to be left in place from the main section to be removed on the Second Branch of the White River in East Bethel. Photo by James M. Patterson/Valley News

Trout like to spend the winters in the warmer main stem and move into the cooler tributaries during the summer for cooling. Cold water holds more oxygen, and water that is too warm will stifle a salmonid species like the brook, rainbow or brown trout. Dams both make water warmer by keeping it stagnant and block fish looking for cooler water.

Will Eldridge, an aquatic habitat biologist at Vermont Fish & Wildlife, said that the Second Branch has a wild population of native brook trout, as well as brown and rainbow trout that were introduced in the early 1900s but have since “naturalized.”

“The biggest concern with dams is the fragmentation of habitat separating populations. When populations are connected, they are more resilient to these more extreme events — floods and droughts and things like that. They can move up and downstream and take refuge,” Eldridge said. “With isolated populations, there is less exchange of genetic material and adaptation.”

John Supan, of Moore Concrete Cutting, right, shows a small sucker fish to Greg Russ, of the White River Partnership, left, below the Hyde Dam in East Bethel. Supan rescued the fish from a shallow pool that was filling with fine sediment from concrete boring equipment and released it downstream. Russ said the sighting was a sign that fish are already recognizing the change in the river’s current from the breached dam and are making their way upstream. Photo by James M. Patterson/Valley News

The additional 60 miles of free-flowing riverway — from the Gulf Road Dam upstream in Randolph to the confluence of the White and Connecticut rivers — means more space for people to kayak and canoe. Steve Libby directs Vermont River Conservancy, which bought the dam and the adjacent lot for $30,000. The nonprofit plans to put in a small parking area, stone steps down the bank and a sign that explains the history of the site.

“Removing dams helps with flood resilience issues that we’re all facing” from heavier rain events caused by climate change, Libby said. “It’s a big ecological system that has significant connection to the society that we live in.”

A puzzle of its own

Each dam removal comes with its own idiosyncratic challenges. Many dams — especially small, out-of-use dams like the Hyde Dam — are privately owned. Russ and the contractors had to maneuver in a tight space to access the dam, especially because part of the small lot is protected as a cultural resource.

Patty Smith lives in the old wooden mill and has a bird’s-eye view of the progress on the dam removal from her window. If it were removed entirely, her home would have toppled into the Second Branch. Next week, though, the contractors will cut through the concrete and stone dam, leaving enough to hold up the old mill building.

The dam removal will mean part of life in East Bethel will change. Fran Rhynhart, a Bethel resident who was watching the dam-removal work earlier this month, said it helped form what at one time had been a popular swimming hole.

“As kids, this was our playground,” said Rhynhart. “All the East Bethel village kids would swim here.”

As of 2021, approximately 140 dams have been removed from Vermont’s waterways. Todd Menees, who coordinates dam removals for the Vermont Agency of Natural Resources, said hundreds of abandoned, possibly dangerous dams remain.

“We literally have no idea how many we have and how many are in tough shape and are dangerous and should be taken down,” Menees said.

He was particularly concerned that old, out-of-use dams may fail, unleashing deluges on people and property downstream.

Vermont can identify dams as dangerous, but its enforcement powers are limited. In most situations, it can only recommend that a dam is removed, Menees said.

In New Hampshire, the Department of Environmental Services has removed 36 dams since 2000 and oversees 2,600 dams, many of which are essentially abandoned.

A number of nonprofits and state agencies have joined together as the “Vermont Dam Task Force.” They meet quarterly to discuss how to make progress on dam removals.

“Our pace of dam removals has increased, a lot. We have six river management engineers; when I started, only four,” Menees said. Right now, he is working on removing over 40 dams — including one built in the years after the American Revolution.

Federal funding may further accelerate removals. The American Rescue Plan — as well as the infrastructure package, if passed — could fund removals. U.S. Rep. Annie Kuster, D-N.H., is also leading a bipartisan push with other lawmakers, including Rep. Don Young, R-Alaska, for what they are calling the “Twenty-First Century Dam Act,” which would allocate $25.8 billion to both improving the safety and resiliency of existing dams and removing unused dams.

The White River waterway feeds into the Connecticut River. This is all part of the New England area of the United States which includes Connecticut, Maine, Massachusetts, New Hampshire, Rhode Island, and Vermont. 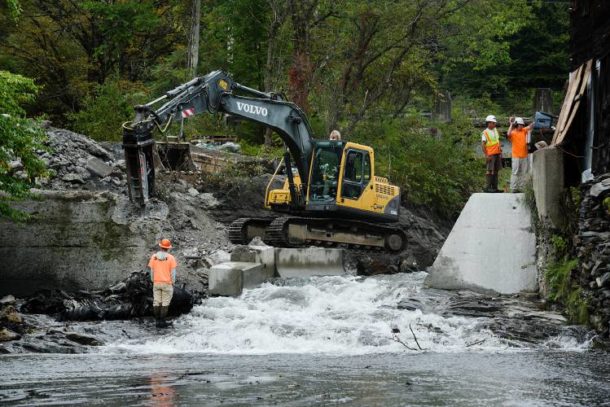 Greg Russ, of the White River Partnership, left, watches as Ben Canonica hammers the Hyde Dam spillway with about half the structure left to remove in East Bethel, on Friday, Sept. 17. Alex Stitt, of Geo Insight, far right, and Matt Murawski, of Ripple Natural Resources, second from right, monitor motion sensors placed to detect if vibrations from the dam removal are a danger to the former Hyde sawmill, which is now a residence. Photo by James M. Patterson/Valley News